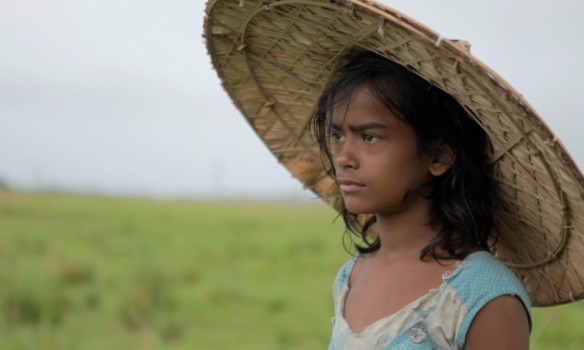 Rima Das’s “Village Rockstars” is a film of ethereal grace and beatific tenderness – a coming of age film of a young girl who dreams of buying a guitar to start her own rock band. Mostly shot in natural light(by the filmmaker herself), the film gorgeously captures the bucolic life along the southern bank of Brahmaputra (shot around the villages of Chaygaon).The film has the spirit of Ray’s films,especially Pather Panchali,in its portrayal of resilient and rebellious female characters, astute awareness of human nature and in its sensibility to find poetry in the mundane.Wearing a Jaapi( A traditional Assamese conical hat),we see Dhuna(played by Rima Das’s young cousin,a terrific Bhanita Das) along with her pet goat running across the verdant farm fields.She possesses a strong independent spirit and her eyes are fraught with undying optimism.These qualities are something that she has seemingly inherited from her widowed mother who encourages her to be strong and fearless like herself.She and her friends spend their time enacting rockstars using guitar made of thermocol and painted with shiny glitter of blue and red, hanging on the trees like little bats and just unhurriedly sleeping in the lush green fields.Though, everything is not dandy with her life as we see her getting caught while reading comic books during classes or getting constantly rebuked by her neighbors for hanging out with the boys instead of girls.Water bodies and bamboo vegetation- prevalent in this region- are shrewdly used and are ubiquitously present throughout the film as important characters. Bamboo logs are used as money boxes as well as oars to row the boats while escaping from tragic floods.

“Village Rockstar” is centered strongly around an endearing mother-daughter relationship.The scenes between Dhuna and her mother are extremely poignant and one of the films major strengths. This is an irresistibly charming film and will definitely leave you beaming as you step out of the dark.

Rahul Jain’ s Machines brings to light an issue which no longer seems to be important enough for the TRP hungry TV news channels – the plight of workers in a private Textile Factory in Gujarat. The state of Gujarat was branded as a big “success” story with figures of its high industrial growth labeled across front page newspapers, hoardings, and television ads. Journalists became cheerleaders and guaranteed the success of the behemoth PR machinery of the state government.Documentaries like”Machines” are made by BBC and AL Jazeera all the time but such is the state of mainstream journalism in this country that it needed an independent filmmaker like Rahul Jain to debunk the false claims and show us that as far as rights for the proletariat is concerned, things have hardly improved.
“The only satisfaction I get is to know that everyone is going to die at the end, even the rich.” bemoans a factory worker.We get to know that these people work 12-14 hours a day at an exiguous pay of 210 rupees per shift.We see broken, tired bodies lay like corpses over sheets of white fabric which they painstakingly make.Illegal Child labor is quite rampant in the factory and the contractor, as well as the manager, seems to be deliberately oblivious to it.
The cinematography by Rodrigo Trejo Villanueva excellently captures each portion of the factory with understated elegance and poetry. The camera takes us through: myriad colors and patterns of fabric incessantly coming out of the printing machines like a sartorial waterfall, barrels of chemicals and dyes, huge rusty rollers and steam boilers.
“Machines” carries the central idea in its name which is that for the owners of these big factories, their workers are not humans but are not different to the rest of factory’s rusty metallic machinery. It’s nothing but harrowing to find out that the owner of the textile factory considers a well-fed worker detrimental to their productivity.He brazenly endorses even lesser pay and employee benefits for his workers. This film is quite depressing in the way it shows the helplessness of the indigent workers, most of them farmers coming from different states, struggling just to survive and hoping someone listens to their silent wails.

“You know, you know how you’re always tryin’ t’ get things to come out perfect in art because, uh, it’s real difficult in life.”

If we look at it, we all seem to be in a pursuit of perfection.Within us lies a strong desire to have a perfect life, a perfect childhood, a perfect career and of course a perfect family living in a perfect house of a perfect locality. Family photos are a great epitome of that desire. The large photographs encrusted with expensive frames adorning the living rooms of houses conceal so many secrets, lies, and scars. It’s designed to make us wonder in awe of the possibility that a group of people who somehow are destined to be together (not exactly by choice) can indeed live together and love each other. Sooner or later we tend to find out that it’s all an illusion. There’s nothing like a perfectly happy family.

In Shakun Batra’s Kapoor and Sons, we see people who are entangled because of this futile and tireless pursuit and as a result cause nothing but suffering to themselves and people who love them. It also poses an intriguing question whether it’s better to have a dysfunctional family or no family at all(Wes Anderson’s Moonrise Kingdom posed a similar question). We see members of a family, having a wonderful house surrounded by the magnificent Nilgiris in Coonoor (We rarely see any locals and the presence of only North Indian public in this South Indian hill station seems a bit jarring)who carry deep indignation within themselves for not getting the love or sympathy they feel they deserve.

Let’s start with the brazenly perverse Grandfather Amarjeet Singh(played by a prosthetic-laden Rishi Kapoor) who very well knows how broken his family is in reality but still forces everyone to pose for that perfect family photo. He wants to have that familiar comfort of falsity before his death. He seems to seek in it a way to preserve his legacy and even optimistically consider it as a panacea for all the problems that plague his family.

Unlike Noah Baumbach’s brilliant Squid and the Whale (2005),  where the father(played by Jeff Daniels) comes out as the most hypocritical and in a way the most pitiable character, in Kapoor and Sons, it’s the mother. Sunita(Ratna Pathak Shah) is angry and resentful at her husband for being a failed businessman(He left his stable job as a banker to start his own business), for not being supportive of her own entrepreneurial dreams and for possibly cheating on her with his former colleague. It seems strange to us that she comes out shocked later in the movie when his husband Harsh Kapoor(Rajat Kapoor) confesses about his affair because she seems to be totally convinced of it happening since forever. This lack of consistency in her character comes out as a peccadillo when one compares it with the emotional damage she inadvertently and (in the case of her younger son) intentionally causes. Her consistent desire to have a perfect son by putting all her idealistic projections on her elder son, Rahul (Fawad Khan) leads the latter to live a totally ersatz and dishonest life.Rahul to her seems to be less like a son or a person but a personal project.The success of which matters so much to her that she is adamant to even lie, betray and completely alienate her younger son, Arjun (Siddharth Malhotra) who wants nothing but to please her and be good enough for her love.

The final act of the movie is really underwhelming as it neatly resolves most of the problems in the family.Batra’s decision to end his film in an upbeat manner as if an unexpected death(I wish the maker hadn’t blatantly lifted Annette Bening’s breakdown scene from American Beauty) was all that was needed turns out to be an insipid one.There is a lot going on in the story but most of the time, it feels that the makers themselves are unaware of its presence or are deliberately avoiding it.Horrible casting decisions like that of Siddharth Malhotra(for arguably the most sympathetic character in the movie) who totally seems beside himself in scenes which are emotionally demanding doesn’t help the cause either. Bollywood movies generally ask its viewers not to think much while viewing or afterwards.“Kapoor and Sons” at least wants us to think and argue about it later and in that way, it somehow manages to redeem itself.

Diagnosing the culture of film, the audience, and the industry

Films from around the World

Rants about anything and everything under the sun!

~for translated and literary fiction

The side road is always more interesting

A life of Saturdays
The Motion Pictures

In The Good Old Days Of Classic Hollywood.

Celebrating the golden age of Hollywood

she writes and she rants
Close-Up
Abbey Bender

Blogging about my love for books, baking, & France.